The ceremony in the historic Old Billingsgate in London conducted by the actor Stanley Tucci and sponsored by San Pellegrino & Acqua Panna - but also by Illy, who from “little” Trieste climbs onto the stage of the 50 Best representative of a still family-based and proudly Italian business - celebrated the Geranium in Copenhagen, led by chef Rasmus Kofoed and sommelier Søren Ledet, with top place in the World's 50 Best Restaurants 2022, now in its twentieth edition. No surprise really, considering that the Geranium had arrived second to its neighbor in Cophenhagen, Noma, winner of the last edition. But in this year's Top 50, there were quite a few unexpected results: sensational falls and dizzying climbs.

And we are not complaining at all! Indeed, Italy’s presence in the top 50 has grown, up from four to six restaurants with a very proud moment for Uliassi, which climbed to number 12 and was awarded Highest New Entry in the list; there are a very respectable 5 Italian venues in the top 20, a fine result. Once again, the best in Italy is Lido 84 in Gardone Riviera, which climed from number 15 to 8, followed by Le Calandre in Rubano, up from 26 to10, Uliassi in Senigallia (from 52 to 12), Reale di Castel in Sangro at 15 (last year it was at 29), Piazza Dumo in Alba at 19 (it was at 18), while with its debut in the top 50 is the sixth and final Italian restaurant, St. Hubertus in San Cassiano, which reached position 29, up from 54.

1080 experts, 27 regions each with a voting panel, one chairperson and 40 experts for each panel (of which at least 25% change every year) with 10 votes available each. This, in numbers, is the most influential (and talked about) restaurant guide. This year, it celebrates its 20th anniversary. In 2002, a handful of food and wine journalists decided–legend has it after an evening of pleasure and alcohol–to draft a list of the places they love, involving colleagues and friends from all over the world to draw up a veritable world ranking.

That year ElBulli was the favorite of the super-experts, who are not only food and wine journalists and critics, but also (in equal proportions) chefs and restaurateurs, food lovers and gourmets, people who fly from one part of the globe to another to sit at the best tables in the world. In short, people who are always up-to-date about whatever is new in the sector, called to try out new restaurant menus, capable of intercepting and often directing new trends, who you can find in all the places that will soon become the next big thing in the restaurant industry, on the wish list of global gourmets.

The sort of people who could draw a map of the air routes flown based on the restaurants in which they have eaten; restaurants which–and this is not a secondary issue–are themselves destinations, therefore capable of influencing the tourist flows to the places in which they are sited. It is not surprising, therefore, that this guide–as is also the case for Michelin–is the focus of great interest and considerable investment. Among other things, given that the chances of being voted (and therefore making the list) increases with the number of people who try the restaurant, although the voters are anonymous, there is a dense web of invitations, from one side of the world to the other. In the 50 Best, communication agencies can really make a difference, not always, but often. It is the unwritten logic of this list that, more than others, thrives on strategies and forecasts.

The only rule of the 50 Best is that there are no rules: the evaluation criteria are completely free, restaurants do not necessarily have to have been listed by other guides, sell a certain product or offer a certain culinary style. In short, every restaurant is eligible for the list (unless it has already won the 50 Best), offering a free and authentic snapshot of the opinions and experiences of the experts, people who can be found sitting at the counter of Den in Tokyo as easily as at a table in Asador Extebarri in Spain. Experts submit their own top ten best restaurants of the year–of which at least 4 must be outside their home region, reflecting their international vision–in which they must have eaten in the last 18 months, which is why it is so important to get them in your restaurant. The integrity and authenticity of the voting process and the resulting list is confirmed by the services consultancy firm, Deloitte. 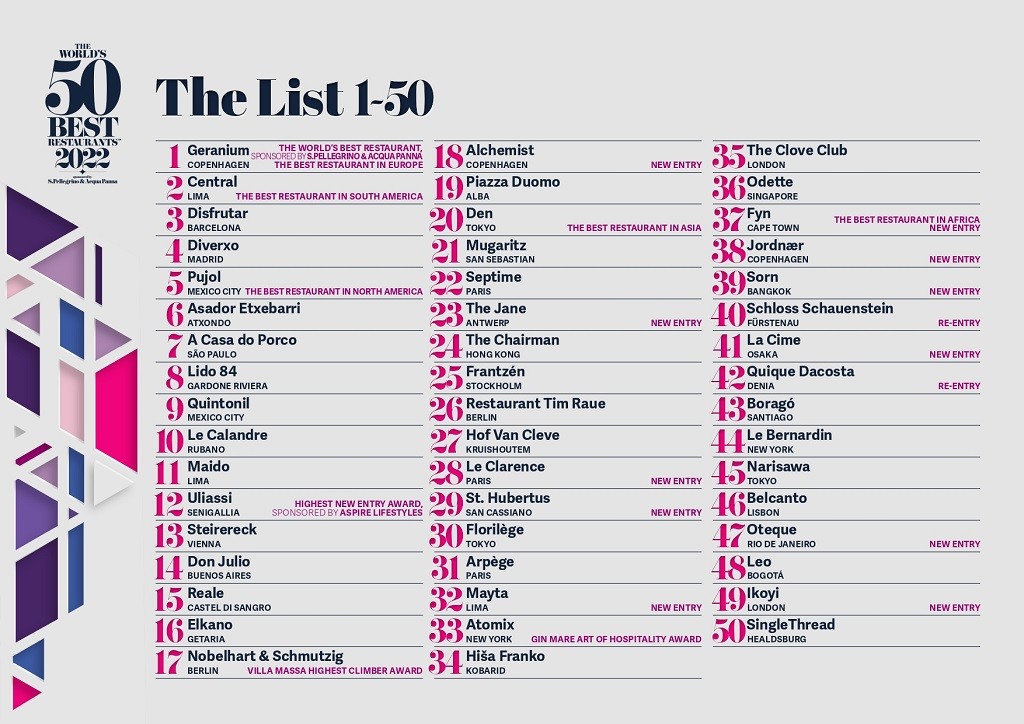 What has changed in 20 years? First of all, local lists have been created: Asia, Latin America and–most recently–Menathe Middle East and North Africa; individual awards have been established (Best Female Chef, Champions of Change, One to Watch and so on), the 50 Next dedicated to people–chefs and others–who can change the future of gastronomy, the 50 Talks, discussion events with professional restaurateurs, and various initiatives in support of the sector (launched in the annus horribilis of COVID), and the Best of the Best , a sort of Hall of Fame that takes the winners out of the game, established in 2019, when they realized that the competition had lost its panache, with the same 3-4 restaurants alternating on the podium, a list which (among other things ) also protects “the best” from the embarrassment of a possible fall from grace.

Together with René Redzepi's 2-time Best of the Best Noma, the list of the cream of the crop includes Massimo Bottura's Osteria Francescana (first in 2018 and 2016), Ferran Adrià’s ElBulli, El Cellar de Can Roca owned by the Roca brothers, Eleven Madison Park, Heston Blumenthal's The Fat Duck, Thomas Keller's The French Laundry and Mauro Colagreco's Mirazur. This year's winner will enter this gallery of the untouchables.

We had left the 50 Best of last year, with the resumption of the live ceremony after the cancellation of the previous edition, in a 2020 ravaged by COVID, with Noma at the top of the list in its golden year, when  Redzepi and his team were also awarded the coveted 3 Michelin stars. Redzepi, who had already made the list from 2010 to 2012 and in 2014, last year was back in the competition with a new restaurant. Noma 2.0 topped the list dominated by Scandinavian heavyweights (in second place, Geranium in Copenhagen, sixth  Frantzén in Stockholm), Spain (in third place with Asador Extebarri in Atxondo and fifth with Disfrutar in Barcelona), Latin America (Central and Maido in Lima in fourth and seventh place respectively, and Pujol in Mexico City in ninth place), eighth and tenth places were occupied by Odette in Singapore e The Chairman in Hong Kong. This year the awards ceremony - originally to be held in Moscow - was held in London, where it was moved following the invasion of Ukraine, to the same city where the first ceremony was held in 2003. Over the years, the event has become increasingly glitzy, a kind of culinary night at the Oscars, complete with a red carpet and dress code (this year slackened due to the scorching heat).

Wawira Njiru, Kenyan nutritionist, founder and director of the non-profit organization Food for Education was awarded the Icon Award 2022, an award that recognizes the true pioneers in the food industry. The second edition of the Champions of Change, which rewards projects that drive positive change in society, was awarded to Dieuveil Malonga from the restaurant Meza Malonga in Kigali, Rwanda, founder of the project Chefs in Africa for training and supporting emerging talent in the African restaurant industry; to Koh Seng Choon, founder of Dignity Kitchen, a collective catering center in Singapore and Hong Kong run by people with disabilities; and to Olia Hercules and Alissa Timoshkina, the first Ukrainian and the second Russian, founders of the fundraising initiative for the Ukrainian people #CookForUkraine.

The much-contested award for World’s Best Female Chef went to Leonor Espinosa, already winner of the Basque Culinary World Prize 2017 for the Funleo foundation, a non-profit created with her daughter Laura Hernández-Espinosa. Finally, a couple of weeks ago, the positions from 100 to 51 were announced, with no Italian restaurants featured, which is a good thing for Uliassi and Niederkofler, who have moved up to the higher category this year, but disappointing because we don’t see any new names on the list and potential future 50 Best entries.

The strength of the capital amidst global revolutions and local changes: a city that continues to attract interest and investments. and visitors from all over the world. Want to know about the restaurant scene?

Born on the 4th of July

Farewell to Gina Lollobrigida, the diva, the icon of Italian cinema 'lent' to Hollywood and rewarded with a Golden Globe and a star on the Walk of Fame