Long live to the American Invasion

Summer all Sold-out in Italy. Italian tourism churns out new records and toasts the great return of foreigners, especially Americans and British. Airline bookings recorded an annual increase of 138% in July, 103% in August and 173% in September; flights arriving from the US recorded 256.8% in July and 228.1% from the UK.

Luxury accommodation benefited the most from the arrival of foreign tourists

The data on accommodation facilities inspire enthusiasm: more than 90% of rooms occupied in hotels on the Ligurian coast, the Amalfi coast, Versilia, the Conero Riviera, Costa Smeralda. Full house also in the tourist destinations in Salento, in the Golfo degli Aranci in Sardinia, in the Riviera dei Ciclopi in Sicily.

Luxury accommodation benefited the most from the arrival of foreign tourists: growth was 5% in June-July compared to the same period in 2019 and–according to estimates by the Ministry of Tourism–6.2% in August. The bad memories of the pandemic have vanished: in June-July, 62% of tourist accommodation reached pre-COVID numbers and 47% had better results (+7%). August too seems to have improved on 2019 and the cities of art are once again a big attraction. 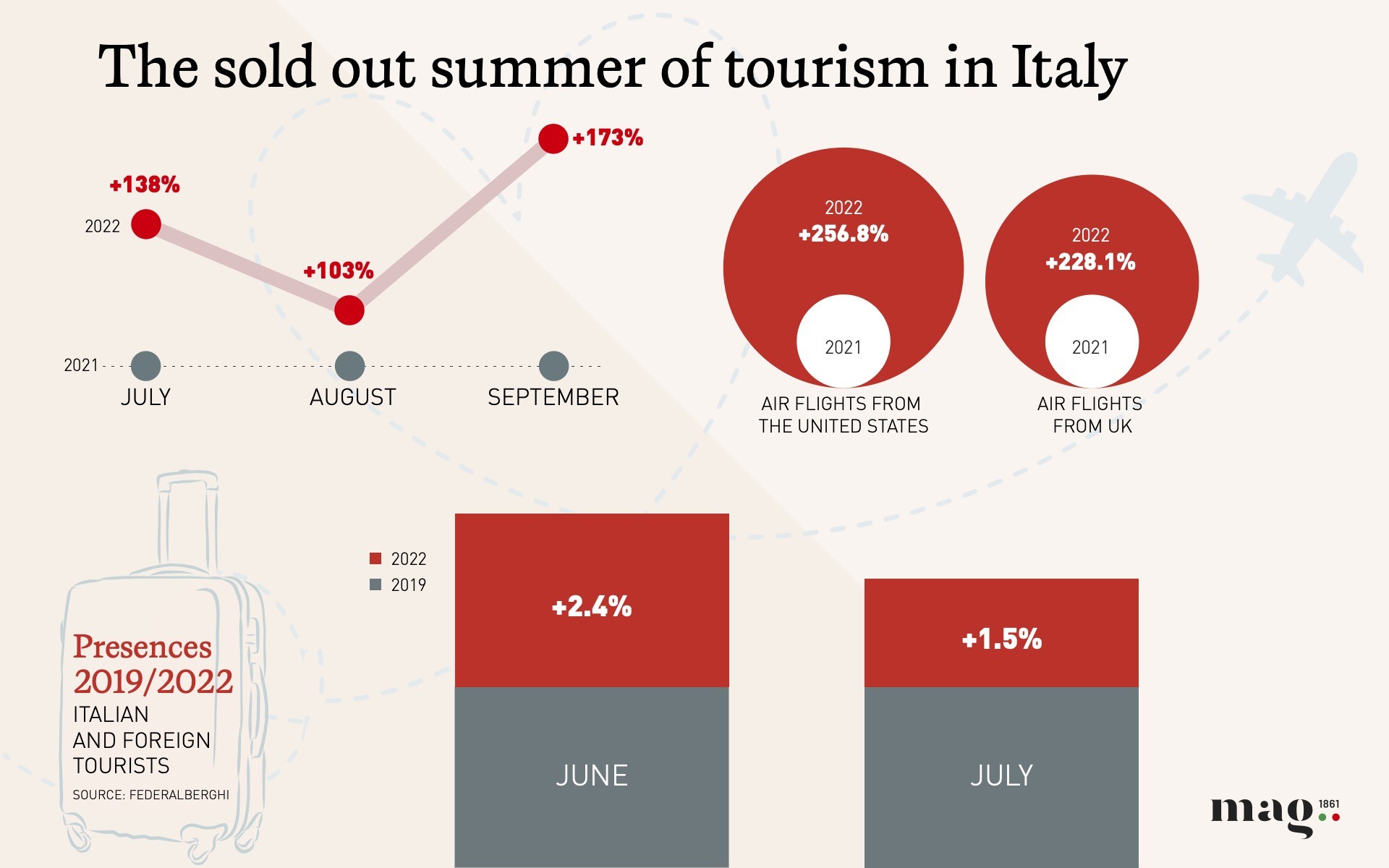 “From Easter onwards,” points out Marina Lalli, president of Federturismo Confindustria, “everyone started traveling again. The good news is that huge numbers of foreigners have come, particularly Americans who belong to the high-spending segment and have made up for the absence of Asians and Russians.”

“The summer will close well, with a positive result,” confirms Alessandro Nucara, general manager of Federalberghi, “even if August did not achieve the successes we expected, given the results achieved in June and July, when the overall increase in arrivals (Italians and foreigners) was respectively 2.4% and 1.5% compared to 2019. Thanks to the favorable exchange rate, we have seen a great return of Americans and Canadians, against the absence of the Russians (even if we have seen some...) and the Asians.

Thanks to the favorable exchange rate, we have seen a great return of Americans and Canadians, against the absence of the Russians (even if we have seen some...) and the Asians

The cities of art,” continues Marina, “after two punishing years have finally had very good results, along with the top destinations: Capri, the Amalfi coast, Portofino, Sardinia. Here businesses have been able to adjust the prices to galloping inflation.” Italians have also started traveling again and “the Regions that have done a good job of promoting and adapting the offer, such as Puglia and Tuscany, have achieved good results.” Results are not as good on the Romagna coast, which “has always been the big summer destination, but because it caters to customers with a medium-low income, it is suffering more from the high cost of living. It has also suffered from the lack of Russian tourists, the great absentees of this summer: it had to reinvent itself quickly but with such low margins, given the disproportionate increases in energy, it found itself in great difficulty.”

Other destinations, such as Molise and Le Marche, continued the positive trend of last year, while Procida, the capital of culture, saw no great successes, since it was unable to make significant changes to the existing accommodation offer. Looking ahead, according to Marina, smaller towns, which will benefit from funds under the Recovery Plan (PNRR), will become more attractive. Certainly, according to the president of Federturismo, the positive trend of the Amalfi Coast and the islands in the Campania region will continue, and for the tourist destinations in Puglia, thanks to the promotion campaign adopted by the Region. But this year, concludes Marina, there were also notable successes achieved by the mountain locations and by boat charters. All results, she concludes, which could be called into question by the hike in energy bills and political uncertainty.

On the tenth anniversary of the artist's death, Rome hosts, until January 6, 2023, the exhibition "Even if time passes"

A man of ideas and ideals, the patron of the brand, one of the geniuses of Italian manufacturing, (re) invented jeans. The interview

A wardrobe dedicated to the "woman who travels in the clouds, but who has her feet on the ground"