Last July, it was Maison Valentino that enchanted fashion audiences in Rome in a spectacular Trinità dei Monti. This time, it was the turn of Laura Biagiotti, who staged her SS23 collection on Monday 12 September in the setting of the Campidoglio, the heart of Rome and a unique stage with which the brand has strong ties.

The Biagiotti Group in fact restored the Cordoned Staircase of the Campidoglio, designed by Michelangelo, and the Two Dioscuri who guard it to their original beauty, and, together with the Intesa Sanpaolo Group, will restore the Fountain of the Goddess Rome starting from September 19.

The international vocation of the Biagiotti brand, which in 1988 was the first Italian brand to hold a fashion show in China and then in Russia in 1995, has never betrayed its strong ties with its home territory that are now reaffirmed both with the inspiration of the collection and with the restoration of the Fountain of the Goddess Rome in Piazza del Campidoglio (works that should last 150 days under the direction of the Rome Superintendence and works carried out by Re.Co. Consortium Restorers) completed thanks to the patronage of the Biagiotti Group and Intesa Sanpaolo. 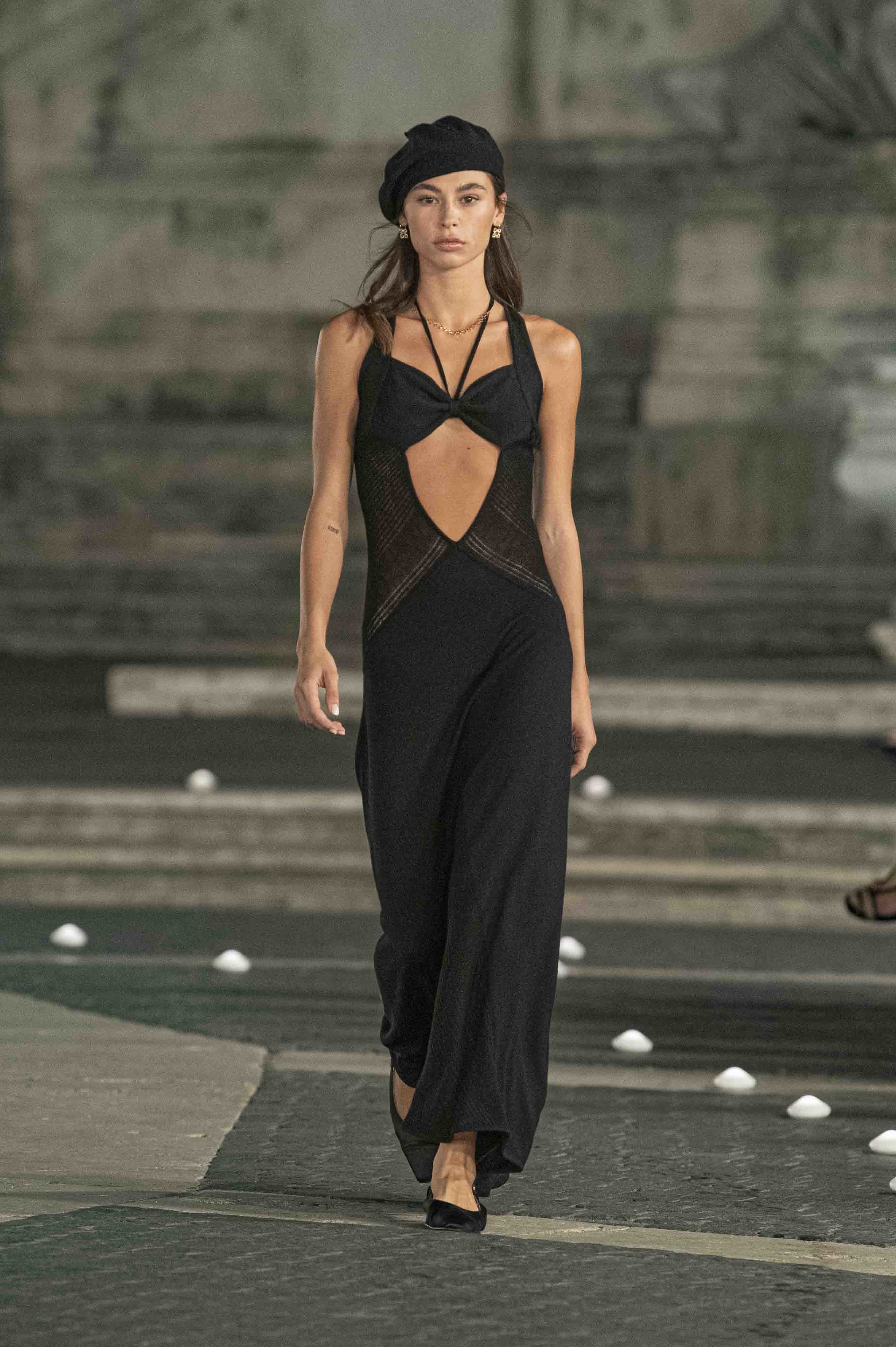 "I imagined that the Third Millennium would have imposed great rethinking, and an obligatory transition from ‘logo’ to Logos,” says Lavinia Biagiotti Cigna, President and CEO of Biagiotti Group

The history of our company and of our family are intrinsically linked to Rome, in a game of references of ethics and aesthetics, reminiscent of the great Renaissance families

The word, the value, ‘being’ at the center. Never before has it been so important to re-establish a solid connection with our home territory. Thanks to the fundamental partnership with the Intesa Sanpaolo Group, we can launch a new great project of beauty and sustainability in the heart of Rome: the restoration of the Fountain of the Goddess Rome. The history of our company and of our family are intrinsically linked to Rome, in a game of references of ethics and aesthetics, reminiscent of the great Renaissance families. Over the years, we have been interested more than anything else in restoring, preserving unrepeatable masterpieces, also to overcome the sense of impermanence of fashion: stones transcend it all. We always fight against time and, after all, fashion is a blank sheet on which to draw the future.”

The great love for Rome is therefore also the theme of the collection in the fashion show at the Campidoglio and that sublimates the iconic references of the Eternal City with all the contaminations of art, cinema and lifestyle that Rome has always reflected out into the world.

The new wardrobe also captures the contradictions of the city, “the lightness of the stones that, by the magic of alchemy, melt in the water of the fountains.”

And so, here is the sweater, a favorite of the Biagiotti maison, worked with stitches and braids sculpted like bas-reliefs. Biagiotti sculpts the sweater in a new way with four-thread silk braids on pullovers and cardigans, net stitch cotton and linen on close-fit dresses, lozenges and cashmere braids on bon ton suits. Prints, shapes and decorations are blended in the great cultural melting pot that has always identified the Eternal City.

The new wardrobe also captures the contradictions of the city, “the lightness of the stones that, by the magic of alchemy, melt in the water of the fountains.”

“Returning to Piazza del Campidoglio, with an innovative format, shows that fashion, like Rome, revolves around something that goes beyond time and generations, molds them and recreates them in new visions. The event is a never-before-seen dialog between fashion, art, culture and golf. It is the birth of a new style made of research and supported by the brand's attitude to build beauty not only with fashion, but also with acts of patronage and with the creation of value in the region. It is the anticipation of an exceptional event that in 2023 will take place for the first time in history in Italy, in Rome: the Ryder Cup, the biggest golf tournament in the world, which will be played at the Marco Simone Golf & Country Club, the complex built by the Biagiotti Group. My infinite thanks go to the Mayor of Rome, Roberto Gualtieri, Councilor Alessandro Onorato and all the institutions for the extraordinary opportunity to stage the Laura Biagiotti Spring Summer 2023 collection in Piazza del Campidoglio. 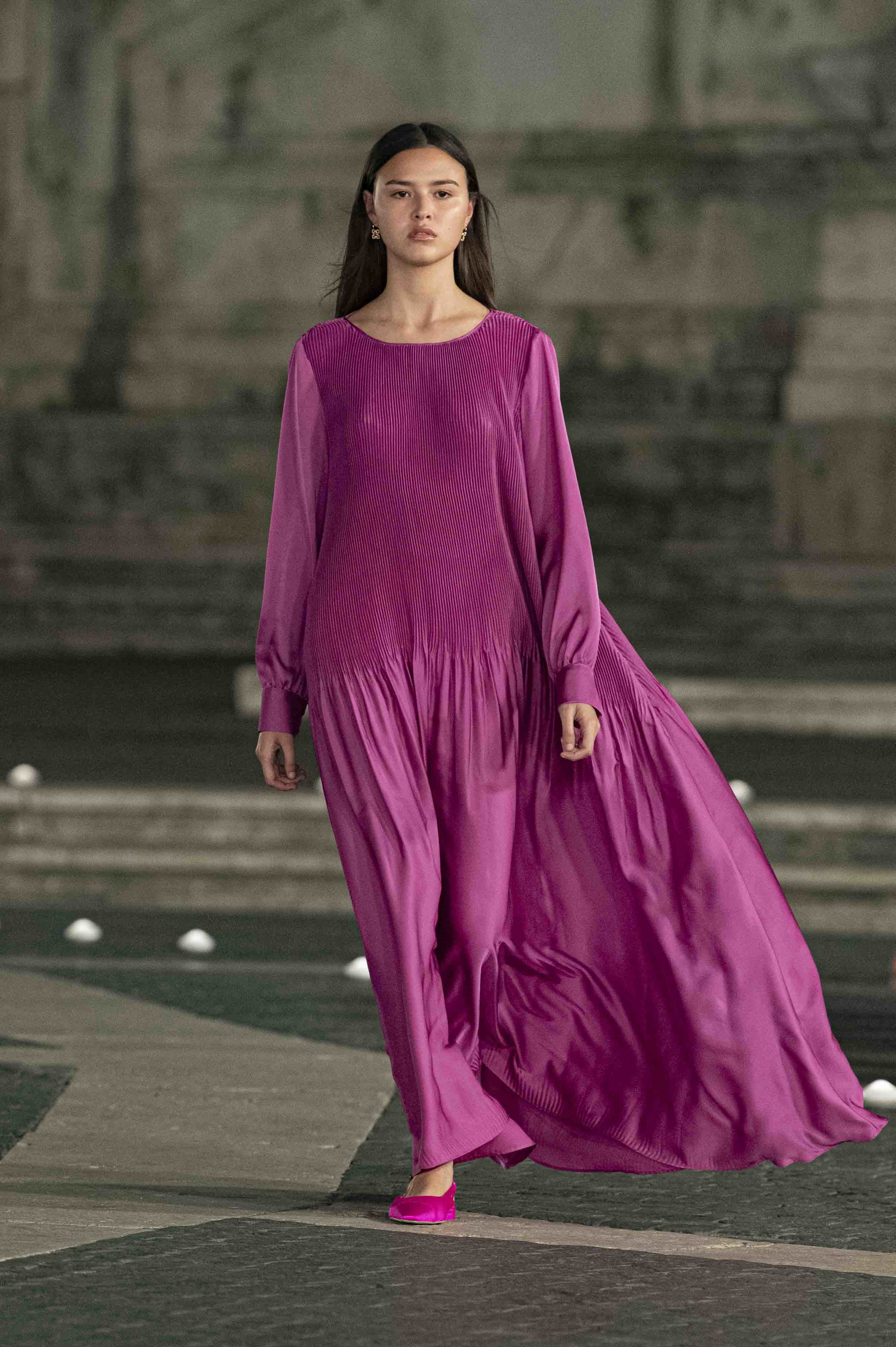 The show combines physical and digital with an ongoing narrative, from Rome to Milan Fashion Week. To testify that fashion is not only a moment of entertainment but also and above all a driving force of our economy.”

There is no shortage of references to the iconography of the city represented by architectural prints (inspired by the works of Carlo Labruzzi, the great eighteenth-century Roman landscape painter) and by marble compositions, imprinted on chiffon, satin and taffeta.

Biagiotti once again develops the fashion-sport combination with a new paradigm: the game of Fashion meets the game of Golf and the monogram ‘LB Golf’ becomes the emblem of Summer ‘23. We can see it on cardigans and ribbed micro-pullovers and Laura-white cashmere braids; it is embroidered in gold on blazers and spring coords and gives shape to the bodice of the long crepe evening dress worn by top model Isabeli Fontana, who opens the show. The collection certainly does not forget the accessories: berets in all the colors of the collection in super-light cashmere yarn and loafers with golden buckles and tassels go from green to everyday shades.

Journey to the sacred temple of textiles, a gigantic and fascinating four-storey factory with large windows in Trivero, the village in the Biella Alps where Ermenegildo Zegna, just 18 years old, founded his wool mill

Year of the Rabbit

Skirts, scarves, bags. The mildest of the animals of the Chinese zodiac makes its appearance on the prêt-à-porter catwalks