Fabrics for evening dresses made from apple peel and cores, sunglasses made of prickly pear fiber, old trench coats dusted off and brought back to life with new forms and new colors. The collections of clothes and accessories proposed by young designers, both Italian and non, in the 2022 edition of Rome Fashion Week from July 11 to 15 bring a breath of fresh air with a significant focus on sustainability and recycling of materials. The event was organized by Altaroma, which confirms the 'mission', undertaken a few years ago, to discover, train and develop new fashion talent. 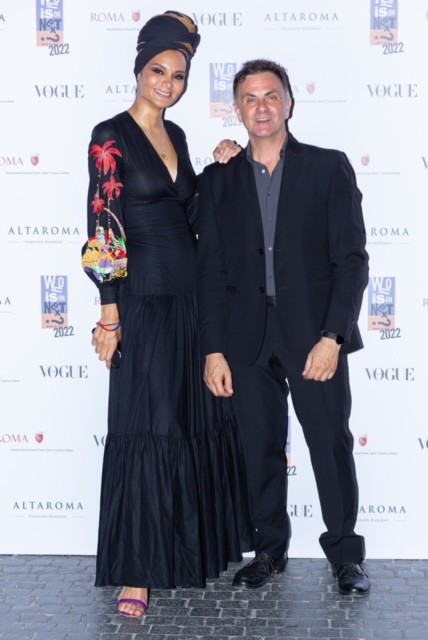 A few days after the Valentino fashion show-event that bewitched the public in Piazza di Spagna, the atmosphere of fashion enthusiasm was reignited in Rome

“We are working to restore the capital to the role it deserves on the national and international stage,” Adriano Franchi, director of Altaroma, tells MAG.

“We are succeeding,” he continues, “thanks to digital innovation, the renewed commitment of the Municipal Authority of Rome after years of absence, and the support of other government institutions, such as MAECI and ICE [TN: Ministry of Foreign Affairs and International Cooperation and Italian Trade and Investment Agency], without which certain projects would not have begun. Above all, Altaroma would not be known internationally, as it is today, with guests and buyers from all over the world, including Brazil, Kazakhstan, Turkey, Greece, France, Spain and the United Kingdom.”

In this edition of Altaroma, 107 brands were presented by young men and women who “are starting their careers with a new mentality, open to the development trends that will accompany us in the coming years.” Fashion interprets and, in some cases, anticipates social changes; therefore “on the catwalk, we saw a lot of gender, a lot of curvy models, a lot of respect for diversity, values that are part of our present.”

Behind the scenes, specifies the manager, there is also “educational work” with the young people who aspire to enter the Fashion System, carried out through the partnerships between Altaroma and Lazio Innova. “The most recently completed courses included training in the field. We have set up laboratories equipped with the necessary tools to work and communicate, 3D printers, software with updated marketing systems, with the aim of helping young people to hone their entrepreneurial skills.”

But there is more. Altaroma is 'training' its fledglings in the metaverse and gaming: realities that feature increasingly in companies. “With Lazio Innova, we partnered on a project to create teams made up of gaming experts, young brands and fashion professionals with the aim of each team creating a game with fashion-related content. They competed against each other and the two winning projects were presented at the Dubai Expo. “Games can be a development driver,” observes Franchi, “so much so that big companies like Gucci and Prada have included elements of their brand in games to improve communication.”

The most hotly anticipated events of Rome Fashion Week included, on July 12, the eighteenth edition of 'Who is on Next?', the scouting project promoted by Altaroma and Vogue Italia, which has been led since it began by two key industry figures: Sara Sozzani Maino, granddaughter of Franca Sozzani, the lady of Italian fashion, and Simonetta Gianfelici, former model and muse of the greatest stylists and photographers.

Ten designers presented their creations on the catwalk set up under the statue of Marcus Aurelius, in the stunning Piazza del Campidoglio, and, at the end of the show, the jury decided the two winners of the Franca Sozzani award. The winners were Setchu by Satoshi Kuwata (women's clothing), and Mokoo by Bum-Mo Koo (men's clothing), who were also awarded a cash prize and will feature in Vogue Italia

How have young aspiring fashion designers changed over the years?  “Compared to 2005, when I started this adventure, the changes I have witnessed are quite radical,” Simonetta Gianfelici told MAG. “Just look at the massive influence of social media, the increasingly widespread use of digital media, distribution through e-commerce, and not least the social distancing imposed over the last two years, the scarcity of resources and the uncertainty of the future. Each of these aspects has rapidly influenced creativity. For emerging talent, it’s no longer about following trends and we are witnessing greater eclecticism. Music, art and cultural contaminations united by a greater sense of environmental responsibility.

In short, the only real trend today is to combine ethics and aesthetics,” summarizes Gianfelici, “is to feel aesthetically and culturally represented by what we wear. It means making more responsible choices for the environment and for ourselves.”

Young creative talent are therefore quick to acknowledge the social and environmental issues that affect our age.

Regarding the choice of materials, we see “many natural fibers, such as cotton, hemp and also nettle, wood, cork and natural dyes.”

There is also a particular focus on reducing production through made-to-order and non-seasonal services, the use of deadstock fabrics and a lot of upcycling. The recovery and transformation of existing garments is a virtuous process of creativity and craftsmanship. Reinventing the existing means using the available resources, preserving the memory and, through creativity, inventing a new language.”

Altaroma now looks to the future. In the coming months it will become a foundation with the aim of attracting talent, new investors and new partners, as explained by the President of Altaroma, Silvia Venturini Fendi, the Lazio Regional Councilor for Economic Development, Trade and Crafts, Research, Startup and Innovation, Paolo Orneli, and the Roma Capitale Councilor for Major Events, Sport, Tourism and Fashion, Alessandro Onorato. There is the broad agreement in acknowledging the love of Rome around the world and the institutions have put themselves at the service of a heritage that needs relaunching. Not an easy task. Is the Middle Ages of fashion in Rome really over and a new Renaissance on the way? Maybe...

Journey to the sacred temple of textiles, a gigantic and fascinating four-storey factory with large windows in Trivero, the village in the Biella Alps where Ermenegildo Zegna, just 18 years old, founded his wool mill

Year of the Rabbit

Skirts, scarves, bags. The mildest of the animals of the Chinese zodiac makes its appearance on the prêt-à-porter catwalks